Images of another time: Aicher’s typeface and his studio, seen by Timm Rautert 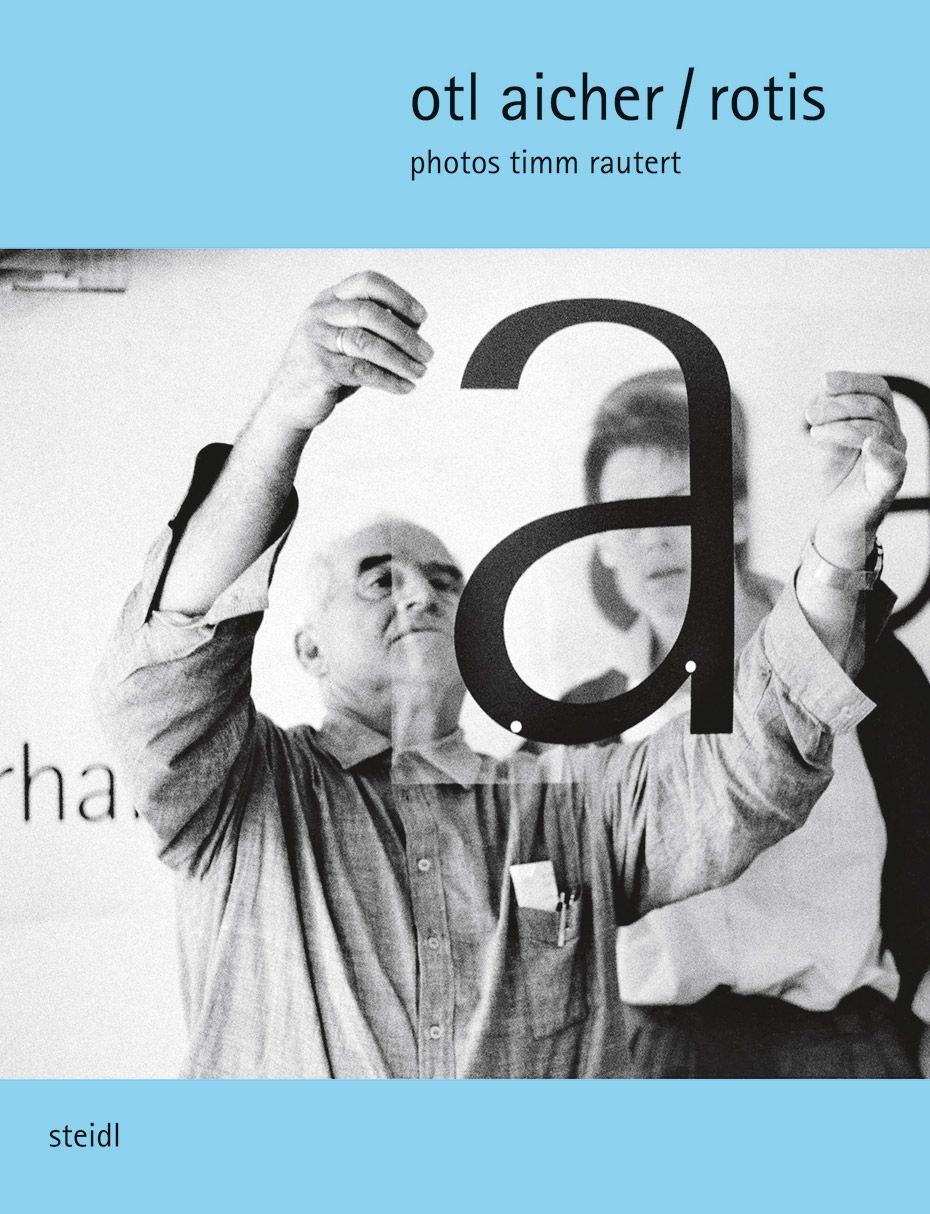 Images of another time: Aicher’s typeface and his studio, seen by Timm Rautert

Rotis as a place, Rotis the typeface – both play the central role in the book by photographer Timm Rautert (born 1941). “If he didn’t like something, he bit his lower lip,” Rautert tells us in a video accompanying his book, “that’s when it became a bit more dangerous. But I stayed firm.” Aicher, according to the photographer, appreciated “when someone didn’t fall over too easily.”

When Aicher lived and worked in Rotis, Rautert not only accompanied him on individual projects (such as the volume “Zugänge – Ausgänge”, published by FSB Edition, with texts by Aicher, Jürgen Becker and Wolfgang Pehnt, Cologne 1990), but also visited him again and again, photographing life and work in Aicher’s “autonomous republic”. Through his own composure, he overcame occasional rejections. Accompanying Rautert’s calm and clear photographs are texts by Dan Reynolds, who looks at the Rotis font family, and Oliver Kimpel, who looks at the historical Rotis, “a place from a different economic and political time: secluded yet privileged, in the deepest West Germany.” Rautert reports on specific features of his Aicher collaboration, such as in the book on the Berlin Philharmonic Orchestra. “two pictures,” Aicher once said in the FSB-Rautert book, “are an invitation to comparison, and where there is comparison, there is no devotion.”

Brilliant graphic designer: A book of essays and illustrations revels in superlatives

Even the preface is not stingy with superlatives: this book pays tribute to one of the “most important” and “most influential” designers of the 20th century. In the “long series of his masterpieces”, the appearance of the 1972 Olympic Games stands out “as the largest, most visible and best known”. The word “magnificent volume” is even part of the title of the latest 256-page essay and illustrated work on Otl Aicher. The editors are philosopher Wilhelm Vossenkuhl and architectural historian Winfried Nerdinger, who introduce Aicher as a thinker at the beginning of the book. Aicher as a teacher is portrayed in contributions by René Spitz (“The Doctrine of Moral Design”) and Tobias Hoffmann. Their texts deal with the “unity of art and design” that was often disputed by Aicher. The designers Wolfgang Sattler (Weimar) and Hannes Gump (Munich) write about industrial design and about colour, while Dagmar Rinker presents the work of Development Group 5 of the Ulm School of Design, with which Aicher realised industrial commissions such as the corporate design for Lufthansa, in order to gradually build up his own office on its basis. Designer Jan-Erik Baars, who teaches design management in Lucerne, traces the relationship between “design and administration” in Aicher’s work.

The chapter “Olympia 1972” takes a change of perspective in the generally biographical structure of the volume. Here, the multidisciplinary designer Kilian Stauss describes the work of Department XI (Visual Design) of the Munich Games organising committee, at which his father Eberhard Stauss worked closely with its director Aicher. Kilian Stauss has long been a strong advocate for the preservation of the design heritage on the Olympic site. Using Munich as an example, cultural scientist Simone Egger will discuss “The Built World and the Image of the City”.

Graphic design plays an essential role in the texts by Gillermo Zuaznabar, Linus Rapp and Tino Graß. They pay tribute to Aicher as an architect, photographer, typographer and type designer, before concluding with a new text by architect Norman Foster: “My Friend Otl Aicher”.

“The point today,” reads the volume’s preface, “is that we rediscover, recognise and understand Aicher.” kte

Photos of life and work: Analogue mediatheque of a companion

Hans G. Conrad was the first student at the Ulm School of Design. Born in the Swiss canton of Aargau, Conrad was only four years younger than Otl Aicher. He had already enrolled in Ulm at the beginning of 1953, although classes did not begin until August. He had come to Ulm through personal contact with Aicher, with Inge Aicher-Scholl and founding headmaster Max Bill. He worked with Aicher on the system for the exhibition pavilion for the German Radio-, Phono- and Televisionexhibition in Düsseldorf in 1955, which served as a framework for new types of products by putting contemporary living and Braun products into context. This helped to significantly change the image and appearance of the Frankfurt based company Max Braun. The stand provided the framework for the phono-radio-combination “Braun SK4 Phonosuper”, mainly designed by Hans Gugelot and Dieter Rams – Wilhelm Wagenfeld, Otl Aicher and Herbert Lindinger had also contributed to details of the device.

From 1958, Conrad was in charge of the trade fair and exhibition design at Braun. In 1962 he moved to Lufthansa as head of advertising. From 1969, Conrad worked on the Visual Design Committee for the Munich Olympic Games (whose chairman was Anton Stankowski). Hans G. Conrad was of great importance as a contact person, companion and supporter of Aicher on the side of his early, important clients. From 1970, Conrad was a member of the editorial board of the magazine Capital. And he was always a factual visual chronicler of his surroundings.

The Cologne publicist, advertiser and university lecturer René Spitz completed his PhD with a work on the organisational history of the HfG Ulm from its beginnings to its end. As a professor, he now teaches design studies, design- and communication management at the Rheinische Fachhochschule Köln. Spitz has been preparing Hans G. Conrad’s extensive photographic oeuvre for years and publishing it in accurately edited volumes. His latest book was published in 2021 on the teaching activities of Josef Albers in Ulm (“Interaction of Albers”), now followed by “aicher in ulm”. Spitz says his aim is “to document facts so that they can serve as a basis for any following studies.”

The work contains more than 900 illustrations, 800 of which show Aicher with students and teachers, in his work for companies such as Braun or the Stuttgarter Gardinen (a not very well-known corporate design project of Aicher’s from the 1960s). Results of his typography teaching are also documented here. Aicher can be seen getting excited about motorbike racings and celebrating at the curved bar of the HfG Ulm, as well as receiving and informing guests of the HfG Ulm – from Theodor Heuss to Konrad Lorenz. An essay by the cultural scientist Thilo Koenig places Conrad’s images in their photographic-historical context. René Spitz himself contributes a text on Aicher’s teaching in Ulm. The book is designed by Petra Hollenbach.