On light blue: typographic tribute to Brighten the Corners 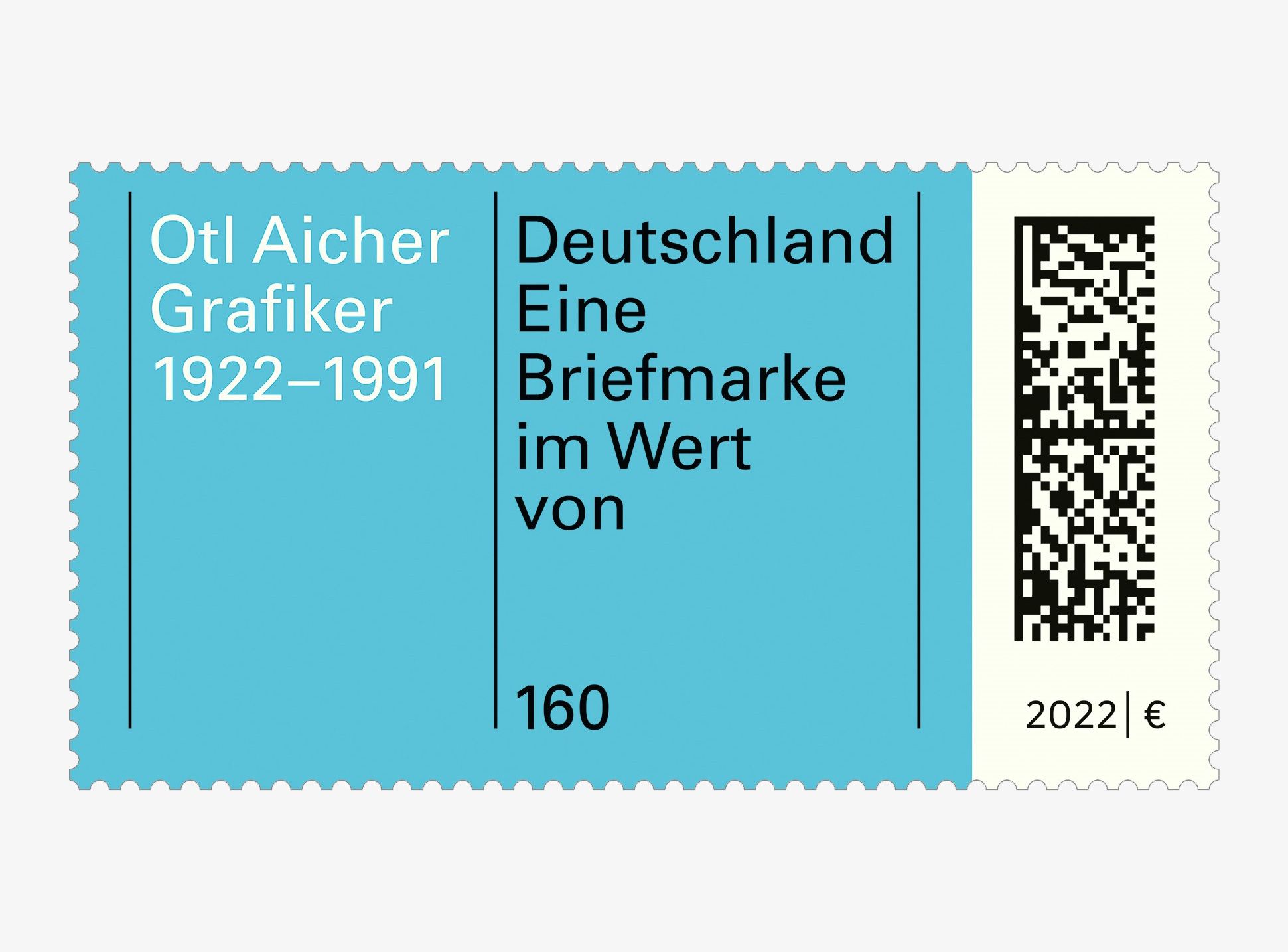 On light blue: typographic tribute to Brighten the Corners

The designers of the British-German office Brighten the Corners, Frank Philippin and Billy Kiosoglou, have deliberately avoided a portrait image. They have little in mind with conventions and feel in agreement with the honoured, who formulated: “a graphic designer is a graphic designer, he is what he can do”. Thus their stamp is adorned with the word “graphic artist”, one of Otl Aicher’s many self-chosen professions, in addition to his name and life data. A profession with which he achieved his international breakthrough as design commissioner for the 1972 Olympic Games. The colour scheme and use of space are reminiscent of the title page of the “Guidelines and Standards for Visual Design” for the XX Olympiad and rules that Aicher developed with his team. The value of the postage stamp is currently sufficient to frank a large letter. The now obligatory 2D matrix code reduces the freely designable area of each stamp. At the same time, it makes franking by postmark practically superfluous, since scanning the stamp detects whether it has already been “used” or not. For collectors – and not only of stamps – Swiss Post also offers a multi-page remembrance sheet in its online shop to mark the 100th anniversary of Otl Aicher’s birth. At a price of 6.95 euros, it contains some photos and texts on his life and work. In addition to that two of the stamps are provided with the Berlin first-day postmark, which was also designed by Brighten the Corners. kte

As part of its “memory games” series, the architecture magazine Detail is publishing a card set with 32 pairs of cards with pictograms. In this way, the long-established Munich-based trade magazine is honouring both Aicher’s centennial and the anniversary of the 1972 Olympic Games. Aicher’s pictograms played a key role in many of his subsequent projects; they are milestones in design history and icons of contemporary culture. The card set “Otl Aicher. Müchen 1972” unites 21 different sports of the Munich Games, like cycling, high jump, and archery, as pictograms and other pictograms that provided orientation on the grounds of the sporting event. The game is accompanied by an essay on the history of pictograms. kte

Cheerful colors, spectacular tent rooftops and an endearing mascot: this is how the 1972 Olympic Games in Munich will be remembered. But also this: an assassination attempt on the Israeli athletes, in which a policeman and eleven athletes lost their lives, are burned into the memory. This year, the 50th anniversary of the Olympic Games will be celebrated in Munich. Throughout the year, under the motto “Munich on the Way to the Future 1972-2022-2072”, there will be exhibitions and events in the city on the topics of sport, culture, design, architecture, culture of remembrance and togetherness in democracy – in public and digital space. To mark the anniversary, the Olympic Village and the Olympic Press City will be celebrating a week of festivities from Friday, 13 May, to Sunday, 22 May.

END_OF_DOCUMENT_TOKEN_TO_BE_REPLACED

A class and its art teacher honour Aicher

On the occasion of the 100th birthday of the designer who was so important for Isny, a lot is happening in the town – even far away from the “aichermagazin” in the Kurpark, which opens on 21 May. In the gallery under the arcades in the Amtshaus on Bergtorsraße, works by pupils of the Isny secondary school who have dealt with the idea of pictorial signage have been on display since the beginning of May. Thirteen picture frames adorn the art window under the arcades at the corner of Bergtorstraße and Kanzleistraße – a “small exhibition” that art teacher Matthias Baader and his students from grades five to eight of the Isny secondary school are proud of. In art lessons in February, they spent several school hours approaching the designer Otl Aicher and the image he once developed for Isny and intensively studied Aicher’s visual language. “Our students dealt with the exciting cosmos of Otl Aicher with a lot of enthusiasm and creative joy,” says Baader. From the students’ point of view, Aicher was not only significant for Isny and the region, but also shaped visual communication like hardly any other creative artist in the world, and “still does”.

The exhibition will be on display under the arcades for about two months. Matthias Baader concludes that the project has “provided young people with an original approach to Otl Aicher’s thinking and doing in an exciting way”.

On the occasion of Aicher’s birthday, the otl aicher rotis e. v. is promoting written works by students or young designers dedicated to the life and work of Otl Aicher. The submitted works should have something to do with Aicher’s oeuvre, deal with an aspect of his works or with a part of his biography. The aim is also to bring to light new topics, rarely considered aspects of his life and work. If the quality and scope are sufficient, the first-placed work will be published; places 1 to 3 will be awarded cash prizes of 5,000 euros, 2,500 euros and 1,000 euros.
Submissions are welcome until 31 January 2023. The jury will evaluate the work by the summer of 2023. The winners will be notified.

In the 1970s, Otl Aicher set an example of modern town advertising with the image for Isny in the Allgäu: with black lines and geometric shapes on a white background, in an almost square frame, 136 pictorial symbols were created that communicate the complexity of the town and the region. Today they are an important part of the town’s design. “What Aicher created for Isny is of priceless value,” emphasises Rainer Magenreuter, mayor of the small town in the Allgäu. For Aicher’s 100th birthday, Isny is therefore presenting itself in the light of the image he created. Not only design enthusiasts, art lovers and graphic experts are invited to the anniversary, but also citizens, friends and visitors of the region. In the temporary exhibition building in the middle of Isny’s Kurpark, visitors will meet Otl Aicher and the town of Rotis, where he worked and lived for a long time. Along the original pictorial signs, they encounter Aicher’s Isny. The curators Monika Schnell, former employee in Aicher’s office in Rotis, and art historian Renate Breuss present the connection between the town and the designer: by using photographs and anecdotes, with the help of digitally accessible audio texts and also with the help of the atmosphere of the exhibition space, which opens up to the top. A comprehensive programme of events accompanies the anniversary from May to October. It stages what was important to Aicher and what is typical in Isny. Well-known Isny events such as the children’s festival and the popular regional markets are dotted with cross-references to the designer. Creative workshops, literary projects, performances, participatory events and guided tours of the town are based on the impressions Aicher once had of Isny: the appreciation of good food and fresh herbs – preferably from one’s own garden, the region’s nature and cultural landscape, tradition, good beer, music and much more.