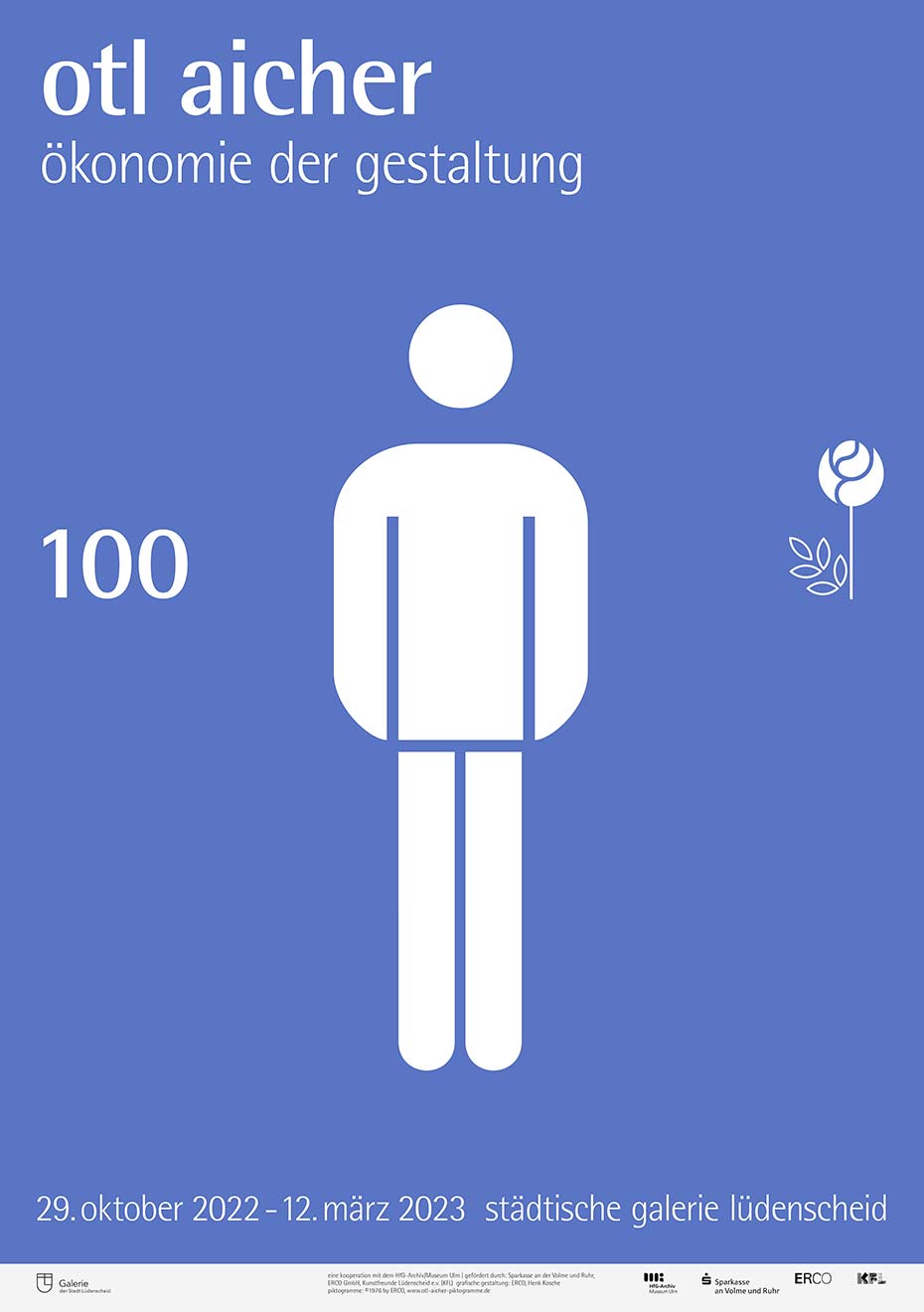 As a pioneer of 20th century corporate design, Aicher was considered authoritative and uncompromising. Two enduring subjects of German design, minimalism and system, were left a lasting impact by him.

Aicher left his mark in Lüdenscheid: The intensive collaboration with Klaus Jürgen Maack (1938-2019) and the Lüdenscheid-based company ERCO began in the fall of 1974, initially concerning the rights to use the pictograms designed by Aicher. In the years that followed, he developed an internationally acclaimed corporate design for ERCO, the basic features of which have been preserved. Aicher’s uncompromising spirit continues to characterize the Lüdenscheid-based company to this day.

For Aicher, design was always political: he understood design as social communication. Everyday objects should make life easier, not more complicated by superfluous ornamentation and useless flourishes. His pictogram system, developed in 1972 for the Olympic Games, conveys information across languages using pictorial symbols.

The exhibition otl aicher – economy of design presents Aicher’s innovative design work, which is based on thoughtful consistency and sustainability. It focuses on companies from the region for which Aicher worked and projects that affect the city of Lüdenscheid. 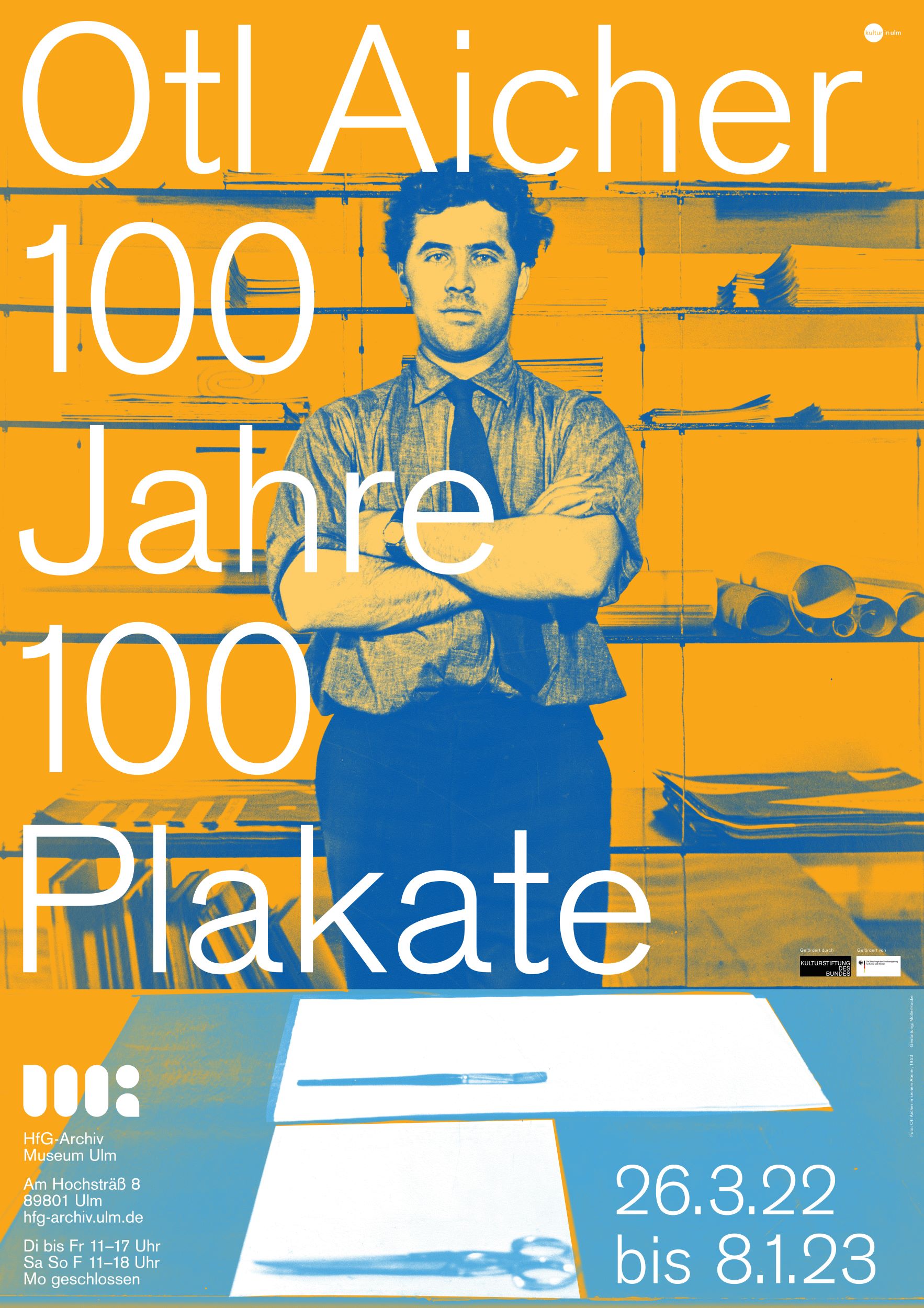 “Otl Aicher 100 Years 100 Posters“ is the title of an exhibition that is being shown in the rooms of the HfG Archive on Ulm’s Kuhberg; it has been running since the end of March. This is where the designer’s estate is located, which the Museum Ulm/HfG Archive are maintaining and processing; in the meantime, it has been documented in a finding aid. The show is dedicated to a central complex of works. Beginning in 1945, Aicher created autodidactically posters , initially for a series of lectures by theologians and writers that he organised in the midst of war-torn Ulm. He soon added further design elements to the pure text posters. This series gave rise to the foundations of the Ulm Adult Education Centre (vh), which was run by Inge Scholl and developed a unique and demanding programme for which Aicher created the posters. For this, he used a narrow vertical format. Special steles, also designed by him and adapted to this format, announced the programme of the Adult Education Centre in an increasingly modern visual language. Aicher moved from one-off prints to serially designed communication devices. In addition to early examples of Aichers work, also posters of Aicher’s probably most important team project, the holistic design of the 1972 Olympic Games in Munich, are shown. His posters for various cultural events, for political occasions and for companies are also on display. They impressively demonstrate the diversity of his graphic work and his thematic interests. During the exhibition, special showcases will alternate monthly to focus on individual aspects that bring the photographer, architect and furniture designer Aicher to life.

At two places; in art and design

With the exhibition “Otl Aicher 100: Form and Resistance” the Museum Ulm and the HfG-Archive are eager to give the viewer an impression of visual forms of design of protest movements. The exhibition is going to take place at two different locations: at the museum at the marketplace, and at the HfG-Archive at the Kuhberg. Aichers oeuvre will be placed with contemporary sociocritical positions. Against this backdrop also the question of actuality of the work and impact of the 1991 deceased designer will be discussed. Already as a teenager, Aicher resisted the NS-Regime. Due to him not joining the Hitler Youth he was denied his Abitur. The exhibition management points out that “his political stance grounded his entire oeuvre.” Since the Sixties Aicher designed logos and posters, not only for companies, but also for political resistance and protest groups.

The first part of the exhibition, the Ulmer Schau from the HfG Archive introduces Aicher’s work, while at the second part of the exhibition, the Museum Ulm will oppose contemporary positions. With the often large-scale works shown there, conceived for public spaces, photographers, installation artists, street artists and graphic artists protest with artistic means against discrimination, violence or excessive consumption. On display are works from the street artists Robin Rhode, he deals with the identity question in South Africa. The Graphic designer Norma Bar displays his “Wear-a-mask” campaign, which is about solidary in the pandemic. An illuminated installation by US conceptual artist Jenny Holzer addresses violence against women. A selected number of Posters that deal with socio-political issues by the US conceptual artists and feminist Barbara Kruger can be found in the city center of Ulm. Through an Open Call, the Museum Ulm invites people to document further contemporary forms of design that deal with protest. These will be shown online. 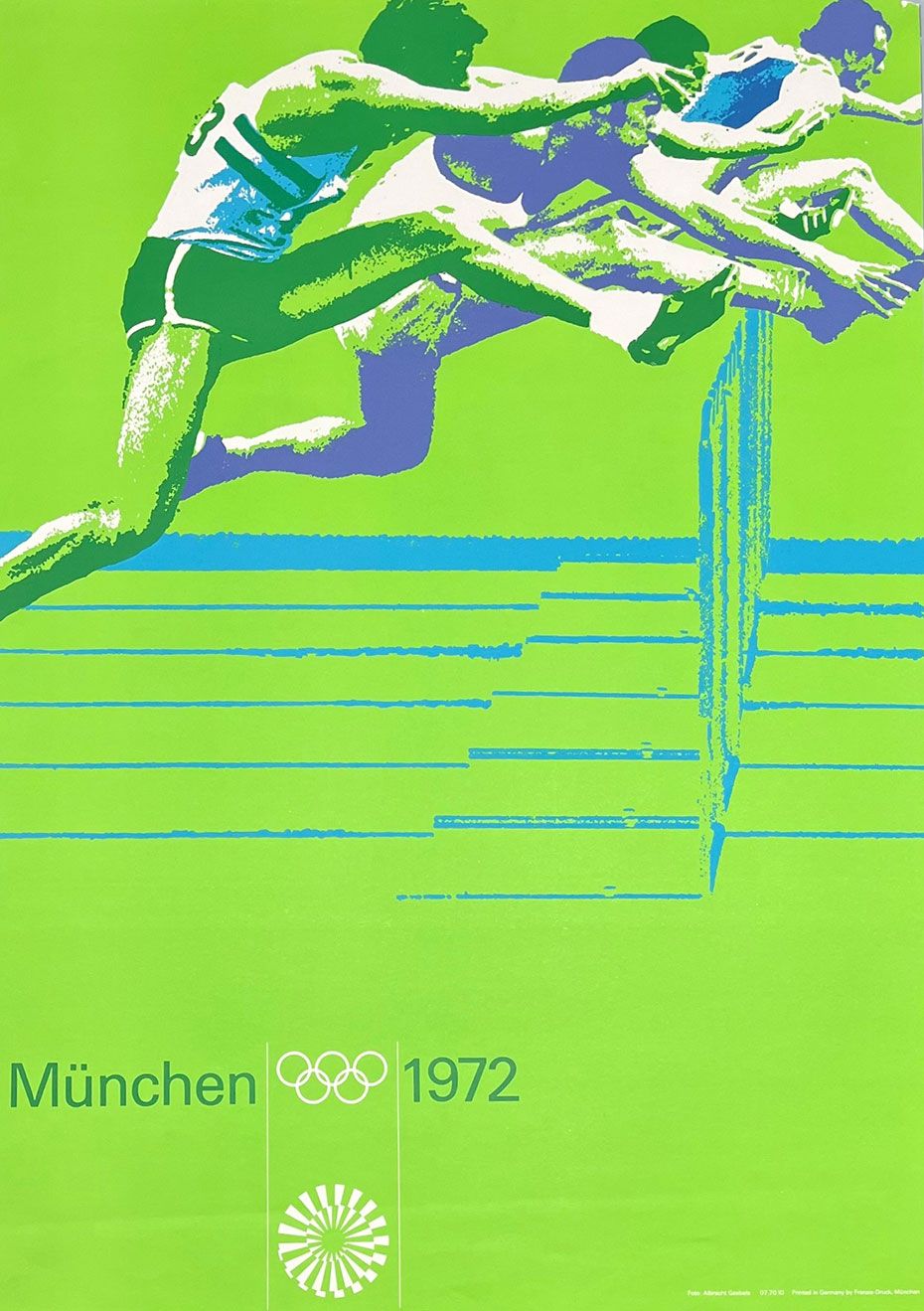 For Otl Aicher, the 1936 Olympic Games were the negative foil for the design of the Games he had in mind for Munich, which were conceived as cheerful. He recognised the quality of the work that was being done there, even if he radically rejected the result. Berlin had been awarded the contract to host the Games during the Weimar Republic. The Nazi state also involved art and design in order to consolidate and propagandistically demonstrate its total rule. But Aicher, in cooperation with NOK President Willi Daume, understood the potential that holistically designed games offered for the young Federal Republic when he became design commissioner for the Olympics in 1967.

Thus, his designs for Munich 1972 were intended to make openness visible and tangible: The design team he selected – young women and men, mostly at the beginning of their careers – created a versatile communication offer. It was aimed at Olympic guests, sportsmen and sportswomen as well as Munich city citizens. In this way, Aicher made a significant contribution to the modernisation of Munich and the transformation of Bavaria’s image. Pictograms, which Aicher did not invent but systematised, soon became established in the context of airports or metro systems, especially when he designed them himself.

Munich’s signage systems, like the temporary Olympic installations in the city, were mostly reserved for visitors attending the Games. But collectors and institutions preserve valuable design testimonies from Munich ’72 that are not tied to a specific location. These include the large silkscreen posters for all the various sports. For each one, the designers created a convincing combination of photography and illustration.

Now the Bröhan Museum, directed by the Munich native Tobias Hoffmann, is showing the exhibition “Otl Aicher and the 1972 Olympic Games” in its Blackbox series. On display are about 100 exhibits, mainly from a private collection, but also partly from the museum’s holdings. Among the objects on display are original posters, but also items of clothing such as hostess uniforms or dirndls. Anyone who wants to experience the design of “Munich 1972” should therefore travel to Berlin.

From the 1980s onwards, the collaboration with Otl Aicher led to a new, systematically developed corporate design and a series of publications for FSB. In the exchange between FSB’s former managing director Jürgen Werner Braun and Aicher, it was not only the door handles of the Brakel-based manufacturer that became the subject of gripping. The manufacturer of door and window mountings is now sponsoring a series of university projects dealing with Aicher’s theses and ideas. One of the first results is an exhibition: “Otl Aicher – piktogramm, schrift, logo” in the Lippisches Landesmuseum Detmold. The life and work of the graphic designer and publicist are presented from the perspective of nine students and three professors from two departments at the Ostwestfalen-Lippe University of Applied Sciences (TH OWL).

In addition to seeing Aicher as the pioneer of corporate design, Detmold also focuses on Aicher as a politically active, controversial citizen. The small show is designed as a touring exhibition, with further stops planned. 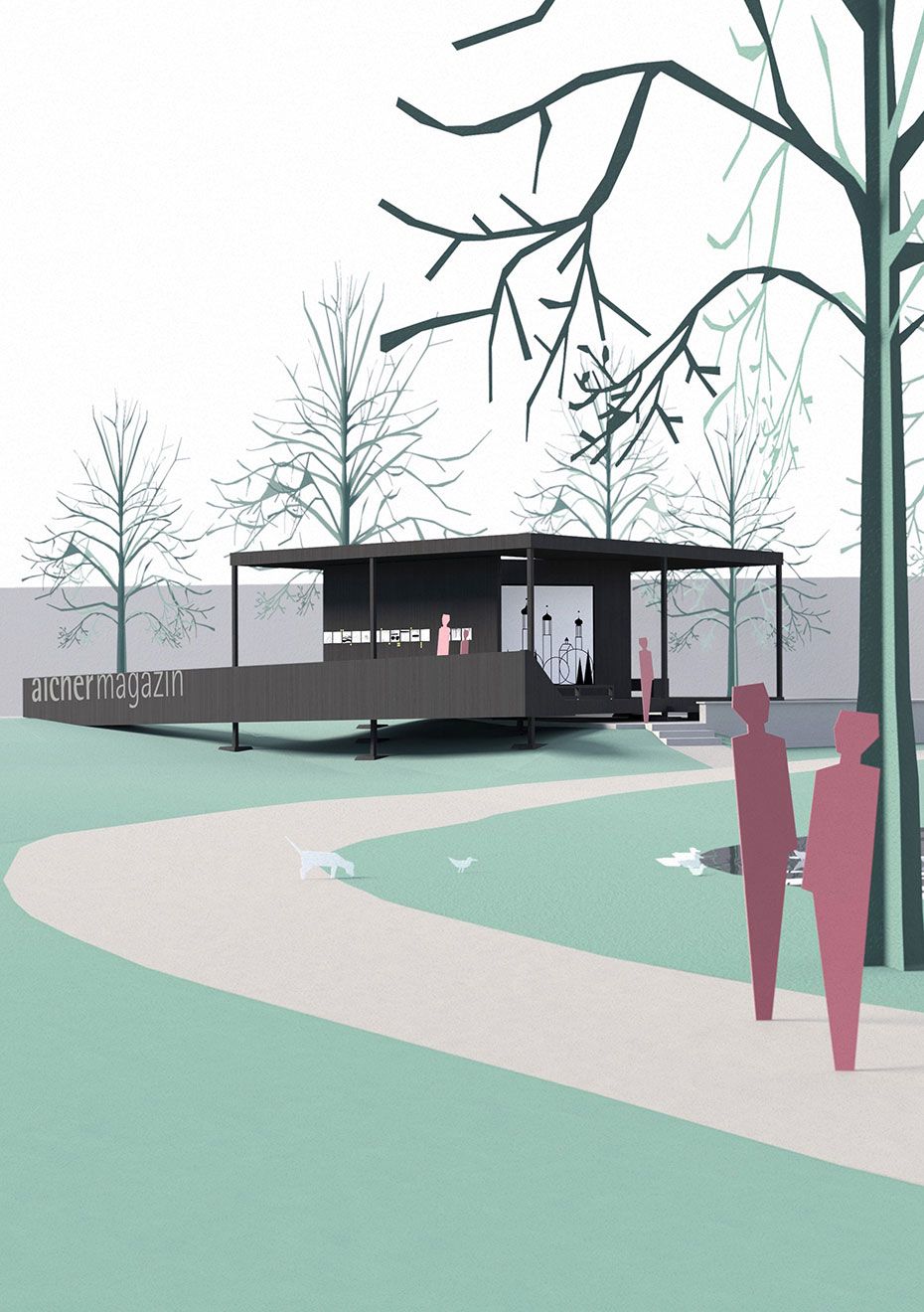 Symbols in the park: walk-in “aichermagazin”

Under the slogan isnyaicher22, the town of Isny im Allgäu recalls the establishment of the town’s black and white image, which Aicher created in the 1970s and which is still used in town marketing today. A temporary exhibition building called “aichermagazin” is being built in Isny’s Kurpark. Here, curators Monika Schnell and Renate Breuß will trace the connection between the city and the designer. Outside, Aicher’s pictorial signs are shown, which address the city and the region. In addition, stories from locals and experts can be accessed via smartphone and QR code, narrating traditions and crafts, landscapes and nature, and reporting on the everyday life of some Isny residents. “Aicher’s pictorial signs are part of the cultural heritage of the town of Isny,” says Renate Breuß, “just like the historical buildings as well. The pictorial signs themselves, like their pool of characters, may not be altered, yet Breuß, who used to be the managing director of the “Werkraum Bregenzerwald”, thinks there is “a lot of potential and dynamism in the compilation,” because Aicher’s legacy “is not to be understood as dogma.” A gallery, a closed room was out of the question for the presentation, notes Karin Konrad of Isny Stadtmarketing, “The exhibition has to go right into the city,” she says, “to the people for whom he created the unique appearance.”

The interior of the pavilion is about Aicher’s life and work. Texts and photos also deal with Rotis, the place about 20 kilometres north of Isny where Aicher lived and worked. The aim is to illustrate Aicher’s “field research approach”, which shaped his ideas and creativity – also in his work for Isny. The aichermagazin is accessible free of charge at all times. A complementary supporting programme focuses on the writer Günter Herburger (1932-2018), with whom Aicher worked and who was born in Isny 90 years ago.